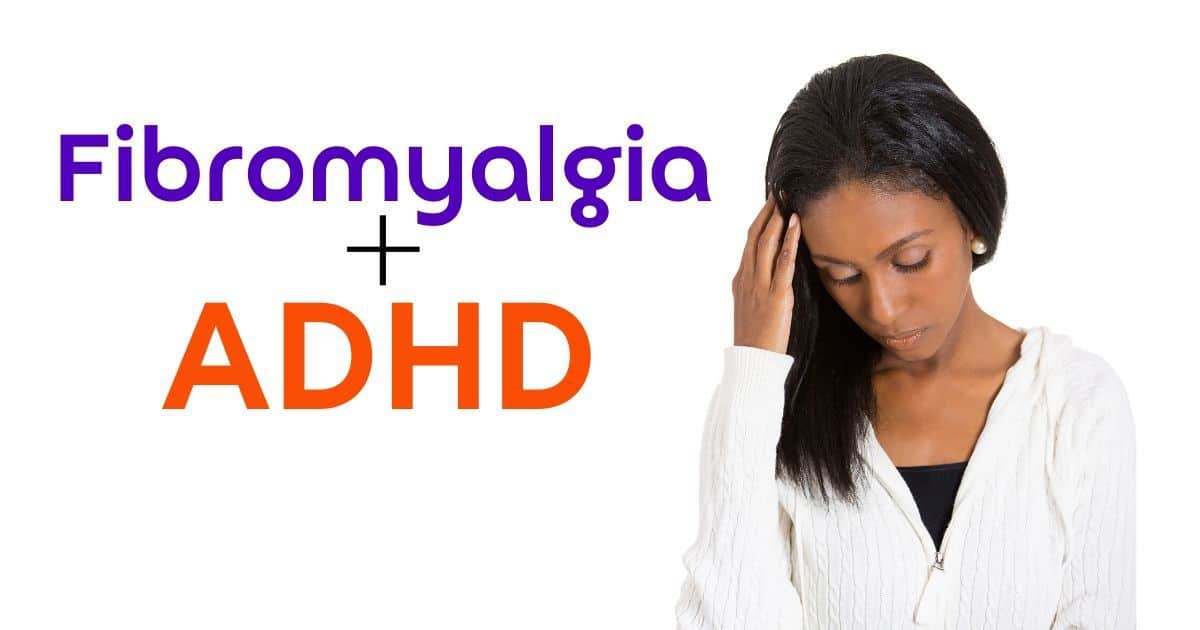 I was 28 when I was diagnosed with ADHD. At the age of 30, my doctor now thinks I have Fibromyalgia and it’s gotten me to thinking: Is there any connection between the two?

It turns out, there IS. In one study, 45% of people with fibromyalgia had co-occurring ADHD. And researchers recommend that anyone with fibro be assessed for ADHD. Wild, right?

While it may seem (at first glance) like these two conditions are quite different there are some important connections that are worth exploring. The fibro/ADHD connection may explain a lot about the challenges of people whose symptoms overlap the two conditions.

If you don’t know much about Fibro it’s, in a very simplified nutshell, widespread pain mixed with brain fog and co-occuring issues like insomnia and IBS. Over the last few months, in addition a bunch of weird pain, I kept noticing that my ADHD meds weren’t doing the job very well. I was more forgetful, zoning out, missing my turn and getting lost on the road again.

Turns out “fibro fog” is a lot like ADHD. And suddenly the two disorders don’t seem quite so opposite. If you don’t know much about what ADHD looks like in women (because it is different) read about that here. And here, too.

Related: Take the ADHD self inventory for Women to find out if you have the symptoms

How Did They Figure it Out?

We can credit this revelation about co-occurring fibro and ADHD to research from a University in South Africa. Researchers observed important overlaps in the way these two conditions impacted people, leading to an ADHD survey for fibro patients.

Symptoms like inability to focus on tasks, procrastination and making careless mistakes due to boredom and inattention were part of the 18-point questionnaire.

Ok, But Why Are Fibromyalgia and ADHD Linked?

Turns out, it’s all about the dopamine. Neurotransmitters within the brain communicate a wide range of messages that translate into varying pieces of information for the mind and body. In people with fibromyalgia, there is an abnormal reaction to dopamine which reduces the ability to modulate pain; this means sensations of pain are greater for people with fibromyalgia.

Makes so much sense, right? If your body is low on dopamine and this impacts your pain sensations, it makes sense that people with fibromyalgia are in pain more than the average person.

Dopamine deficiency is also a key component in ADHD and this results in some of the more common symptoms such as impulsivity and challenges with focus. Ding, ding, ding!!! Isn’t it interesting? These two seemingly different conditions aren’t so different after all. I know, right? Mind BLOWN.

Bring in the Dopamine! Stimulant Solutions for Fibro?

Ok, so here we are, with this crazy new information about the link between ADHD and fibromyalgia. If we are to make the leap in the interest of finding solutions, wouldn’t it stand to reason that stimulants may also help fibro fog?

Turns out, on rare occassion, doctors do prescribe stimulants to fibro patients. There are many important factors to consider, though and it’s not super common (probably because outside of having ADHD, stimulants are pretty addictive).

When ADHD and fibromyalgia are co-occurring, using medication to treat both conditions makes sense and some have said that controlling their ADHD does help with the pain a little, too.

But remember, not all people with fibromyalgia have a co-occurring ADHD condition. There are a range of things to consider regarding prescription usage, and the pros and cons of using stimulants for fibromyalgia should be carefully considered with your doctor (duh, right?).

Alternative therapies and homeopathic remedies harken back to ye olden days. If you’ve been diagnosed with ADHD or fibromyalgia, but have had a difficult time accessing necessary treatments (because getting a doc to listen can be difficult sometimes), these alternative methods may be helpful.

Maybe you’ve tried medications and find the side effects intolerable and stimulants just aren’t in the cards for you. Whatever it is, alternative treatments may not offer the perfect solution to every ailment, but sometimes they can be a helpful support.

I still say talk to your doctor before you do, though, because natural doesn’t always mean safe. My husband likes to say, “Remember, poison ivy is natural sooooo…”

Here are some alternative methods to consider, as you explore your treatment options for fibro-ADHD:

Fibro? ADHD? Talk to Your Doctor…

If you’ve got a lot of symptoms of one, the other, or both it’s still a good idea to talk to your doctor for an accurate diagnosis. Fibro is the great mimicker and can look like a lot of other issues–or could acutally BE those other issues and the right treatment is key. Same with ADHD, to be honest.

And yet, I know that especially with ADHD, it can be really hard to get a doctor that is well versed in Adult ADHD.

If you’ve had trouble being taken seriously by doctors, make sure you check out the Patient and Doctor’s guide to getting an accurate ADHD assessment. The guide gives tips on how to find a doctor that’s up to date on ADHD and has knowledge about the latest research and treatment options.

Within the guide is a mini self-inventory that you can share with your doctor and use as talking points and to help you express your experiences accurately.

Don’t let a bad experience keep you from getting your needs met, ladies. Self-advocacy is a must. Your health and wellness (and dopamine levels) deserve your attention.

Ok, now tell me truly. Did it shock you that the overlap between ADHD and Fibro is so high? Or was that just me?