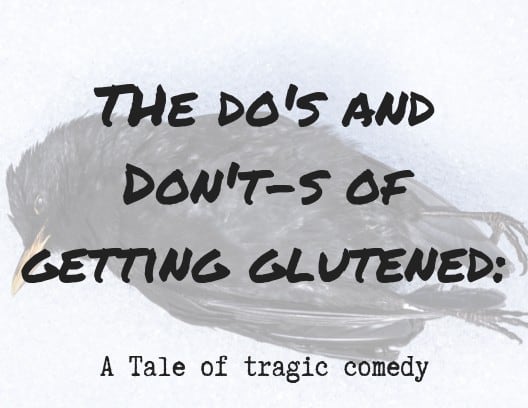 The Dreaded gluten monster strikes again. Join me for my tale of woe. Well, comedy and woe….my woe, your comedy. That’s more like it.

Get this: I’m at a friend’s house hanging out and we decide to order take out. No problem, I think to myself,  I’ll just give the people really clear instructions for what I need them to do when I order. It’ll be fine.

I was so naive. Que Pena.

The food was amazing but on the way home, my stomach started rolling. And twisting. And squeezing. And cramping. I get home and lay in bed hoping that I can just sleep it off somehow but my thoughts keep coming back to why God, why? And I promise I’ll never do that again if you just make it stop hurting and it’s weird to think my stomach is literally attacking itself but FIGURATIVELY speaking, I’d like to rip my intestines out to make them stop hurting. That last one is the nerd in me. Not even gluten shuts that one up.

And then, lucky me, as I lay there my knee starts hurting because, not sure if you are aware of this but…Celiac is an autoimmune disorder and joint pain, at least for me, is part of the deal. No, I can say definitively that it’s not just a stomach ache. Can you see the eye roll there? Can you feel it? Because it’s there… I’m like, yeah it’s a stomach ache where your body starts trying to destroy the lining of your small intestine and your joints feel like you have glass in them. The stomach ache FROM HELL MAYBE! Que Pena.

Had I been able to sleep it off, this post wouldn’t be a thing. I mean, I guess it could be but it would be a lot more boring than what I have in store for you. Lucky you. Not so lucky (or smart) me.

First up. You wake up thinking, YES! I slept it off. And in celebration, you drink your favorite coffee. It’s going to be a good day…

You regret that coffee about 10 minutes after finishing it. There go your intestines again…

Note to self: DON’T Drink Coffee when you’re glutened

Next, after finishing up in the bathroom (I’ll spare you the details), you get back in bed and lay down with your weighted blanket, your best canine buddies, and more importantly, your heating pad. I’ve tried soooooooo many over the counter meds for gluten attacks but haven’t really found anything that works. The heating pad, though? Yeah, it’s a necessity.

You notice your stomach is waaaaaaay too upset to eat anything so while watching your favorite show (today it was scrubs. I mean, I’m basically JD in girl form) to distract your thoughts from the above, you sip on some coke because while pepto is basically a sugar pill, my celiac dad swears by coke to settle your stomach. First time trying it. So far, so good.

Note to self: Coke seems to help a little.

Your stomach starts to feel better but it’s short lived. All of a sudden it’s like it realizes that it’s 6pm and you haven’t eaten. WTF man, I NEED FOOD! So you think to yourself, I must be better if I’m hungry and you devour a huge plate of gluten free fries.

You regret it almost immediately. It was merely the eye of hurricane Celiac and now it’s time for round 2.

Note to self: Hunger is a liar. Don’t eat, you’ll regret it.

But you leave the door open so you can see the dogs play and the crazy Bassador decides to bring his toy and try to play fetch with you while you’re soaking. He drops his saliva infested toy in your bath water and won’t leave you alone. Sigh another regret.

Note to self: Bath–Good. Door open so you can be with the dogs—Bad.

Your stomach has settled and is starting to feel hungry again. Nope, you tell yourself. I recognize your lies this time! But your husband bought your favorite ice cream and it’s calling to you from the freezer. I’m amazing, it calls. You want me more than anything else in this house. It will be different this time. It will be better, I swear. But you don’t give in because you learned your lesson with the fries, right? Wrong. And you regret it again…

Back to bed you go, heating pad ready hoping to sleep off the rest of this miserable gluten “stomach ache”/joint pain/nausea/acid re-flux/anxiety/self loathing. Then pray to the Celiac gods that you have finished your punishment and tomorrow won’t start it all over again.

Note to self: DON’T fall asleep on the heating pad(…again…)!

On the bright side, you were rockin’ some pretty cool hair today… for yourself I guess…

Yep. Celiac sucks. Can I get an AMEN!?

One comedy piece for both of us though… the mister thinks I made up the term “glutened.” He doesn’t realize that’s really what it’s called. He thinks I made it up to be funny and that I’m basically a genius. I see no reason to correct him…