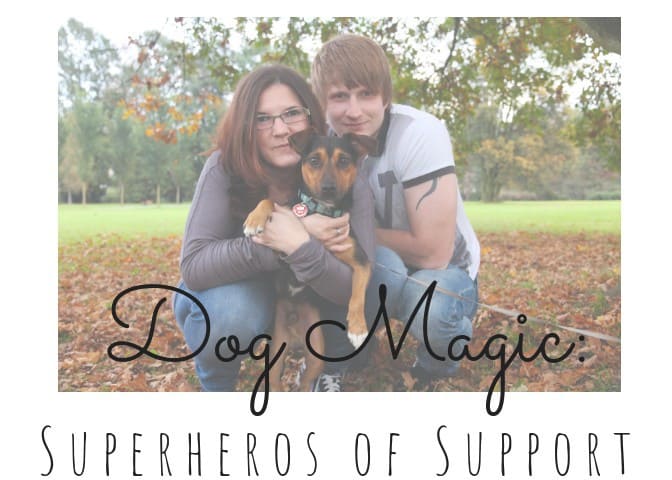 I don’t get people who don’t love dogs. Is it just me? The mister insists that he’s a cat person…bleh. To me, the puppy eyes, slobbery kisses, and clumsy exuberance of a dog is…perfection.

Like, we think man is the pinnacle of creation but in reality God was like, “hey bro, you’re missing unconditional love and a never ending game of fetch from a being that will literally wait by the door until you come back so they can attack you with kisses. Here…you’re welcome.”

All of that aside, I’ve learned over the last few years how moving it can be to have a dog when life becomes painful. My first taste of it was on a car ride with the big guy. He has always been the kind of dog you could swear was on speed–I mean, I took him on a 4 mile hike once and he had more energy at the END of the hike than he did at the beginning.

Anyway, we were in the car and the mister got a really upsetting phone call. He was angry and he smacked the door to vent his frustration but it was obvious that more than angry, he was feeling a lot of emotional pain. Yeah, it was a pretty rough call.

Big guy, momentarily laying his exuberance aside, somehow seemed to understand the pain under the anger too. From the back seat, he gently nuzzled his head over the front head rest and into the mister’s neck…and just snuggled with him.

The mister’s entire body seemed to melt as the anger drained. There is nothing I could have done or said that would have brought the emotional relief that came in that moment. Zeus somehow knew what he needed and it was perfect.

I was watching while driving…thankfully we didn’t wreck 😀

That experience led me to do more research on dogs and their ability to recognize emotion. I came across a study in which researcher’s laid pictures of human faces expressing various emotions on the floor and brought dogs in one by one to observe what they did.

Each dog did the same thing; they walked up to every picture and studied it carefully before moving on to the next picture.

…Until the dog reached anger. As soon as the dog reached that expression, he tensed and slowly backed away. Every single dog. This and other studies have shown that dogs are capable of reading and responding to human emotion.

What is really interesting to me is that Zeus seemed to know that the mister was actually feeling hurt and sad even though he expressed anger first.  Meanwhile, despite the anger, he didn’t back away but instead responded with coming closer.

Fast forward a few years. We moved a few hours away from everyone we knew. I have always been really close to my family and have always lived close by so the move, even though minor in the scheme of things, was huge to me.

I don’t make friends easily and never have. I’m pretty shy (though I’ve learned to fake an outgoing persona when it comes to my professional life), I’m reserved and I have a good bit of social anxiety so making friends usually only happens when someone much more outgoing than I, forces themselves into my life.

Or if the mister forces someone into my life–stories for another time.

So here I am, several hours from anyone I know and the mister is in school full time and our hours are opposite of each other. I’m working a job that isn’t paying our bills so I’m struggling with that and before I know it, depression is worming it’s way in.

I’ve always been the person who really enjoys being alone for extended periods of time and I had no idea how to handle it when suddenly the thought of being alone again made me want to cry.

It was during this time that I learned on an even more personal level the comfort that connection with a dog can bring. We lived next to a dog park and Zeus discovered that there is nothing he loves more in the world than to chase a ball until he falls over in exhaustion. He would come inside and collapse on me, wanting snuggles and cuddles or the first time in his life and I relished the comfort.

Zeus is a pretty smart little dude, so I passed a lot of the time I had alone teaching him tricks and as long as I had treats, he was happy to oblige. Mars was always content to be in my lap, asleep and for days on end, they were the only personal connections I really had in my life.

I don’t know how I would have made it through that first year without those two. They brought me joy when I struggled with loneliness. 6 months into our time in this new place, everything fell apart.

The Mister’s school shut down. I lost my job in a terrible turn of events that led to so much stress I dropped weight rapidly and ended up really sick. And even though these two couldn’t fix my world falling apart, they helped me hold it together just enough to rebuild.

It’s because of that experience that I’m a firm believer in the benefits that support animals can have on mental health and stress reduction. When we are so lost we can’t take care of ourselves, there’s something about those puppy dog eyes that can convince us to keep going. And when we are lonely and broken, that unconditional love and slobbery kiss is always there waiting.

It’s because of that I call myself a dog person. 100% a dog person. I may be very shy and reserved when it comes to people but I’ll talk to any dog I see. They brighten life and I’ve never been more thankful to have dogs in my life than I have been over the last two years.

Do enjoy this story telling, hilarious photo progression of my two crazies. You’ll see why they were so helpful in beating loneliness ?

In case you need to know:

These two bones they are fighting over are some of the greatest dog inventions I’ve found. Zeus is a power chewer…like he makes it through a huge elk  antler in less than a month…should take him a year…that kind of power chewer.

This bone, though, it’s perfect for the destructive, bone obsessed dog. Both dogs absolutely love them and they are way cheaper than the elk antler and have lasted significantly longer. If you have a dog that loves a good bone, this is seriously it. You’re Welcome 😉

How has your dog enriched your life? I told you my story, I’d love to hear yours. Leave me some love in the comments and remember to subscribe so you don’t miss the good stuff coming next 😉